The Wetheringsett Organ | The Gray Organ

Both the organs at St Swithun’s (The Wetheringsett and The Gray) are of huge artistic and historical importance in themselves: together they offer organists and listeners an unparalleled opportunity. England produced supremely great organ music consistently for over three hundred years: these two organs allow us to experience that great chapter of our heritage played on precisely the instruments for which it was designed. There is a programme of monthly lunchtime organ recitals held on Fridays from June to October. Click here for details.

If you wish to have access to the organs in St Swithun’s to hear a demonstration to play or to practice, please contact our Curator/Organist Andrew McCrea or Will Scott.

Listen to the sounds of St Swithun's

Unlike the Gray (which is, in essence, an original Georgian instrument, recently restored), the Wetheringsett is a modern 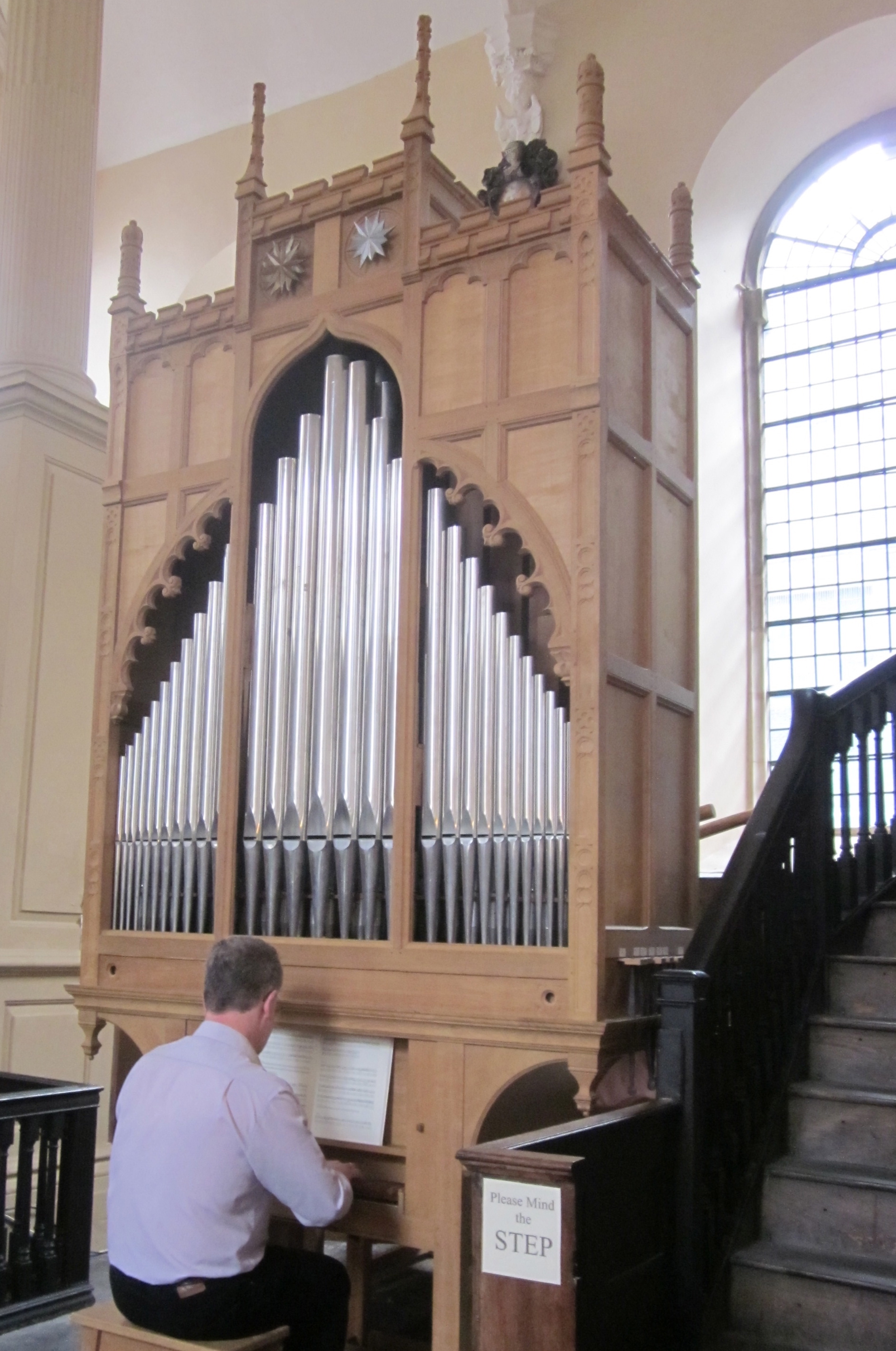 recreation of an organ from about 1530. The entire instrument has been re-constructed from one original piece: the sound board, on which the pipes stand. It’s quite a story: a piece of wood used as a door in Wetheringsett, Suffolk (hence the name) had holes in a meaningful pattern which suggested a particular original use; eventually, these were examined by an expert, and the ‘door’ was declared to be part of an early organ. From that original piece, together with a great deal of scholarship and technical expertise, this instrument emerged. That research and reconstruction was part of the Early English Organ Project: the instrument is now owned by the Royal College of Organists and is currently housed at St Swithun’s. Click here for more information.

The instrument was originally built in 1795 by the well-regarded organ-builders Robert and William Gray. This was a one-manual instrument of seven stops (sets of pipes) housed in the same mahogany case that we see today. Six of those original seven stops still substantially survive: sadly, we have lost the Trumpet stop. (May it soon return!)

Very few church organs from this period remain more or less intact and in a state so close to the builders’ original intentions. 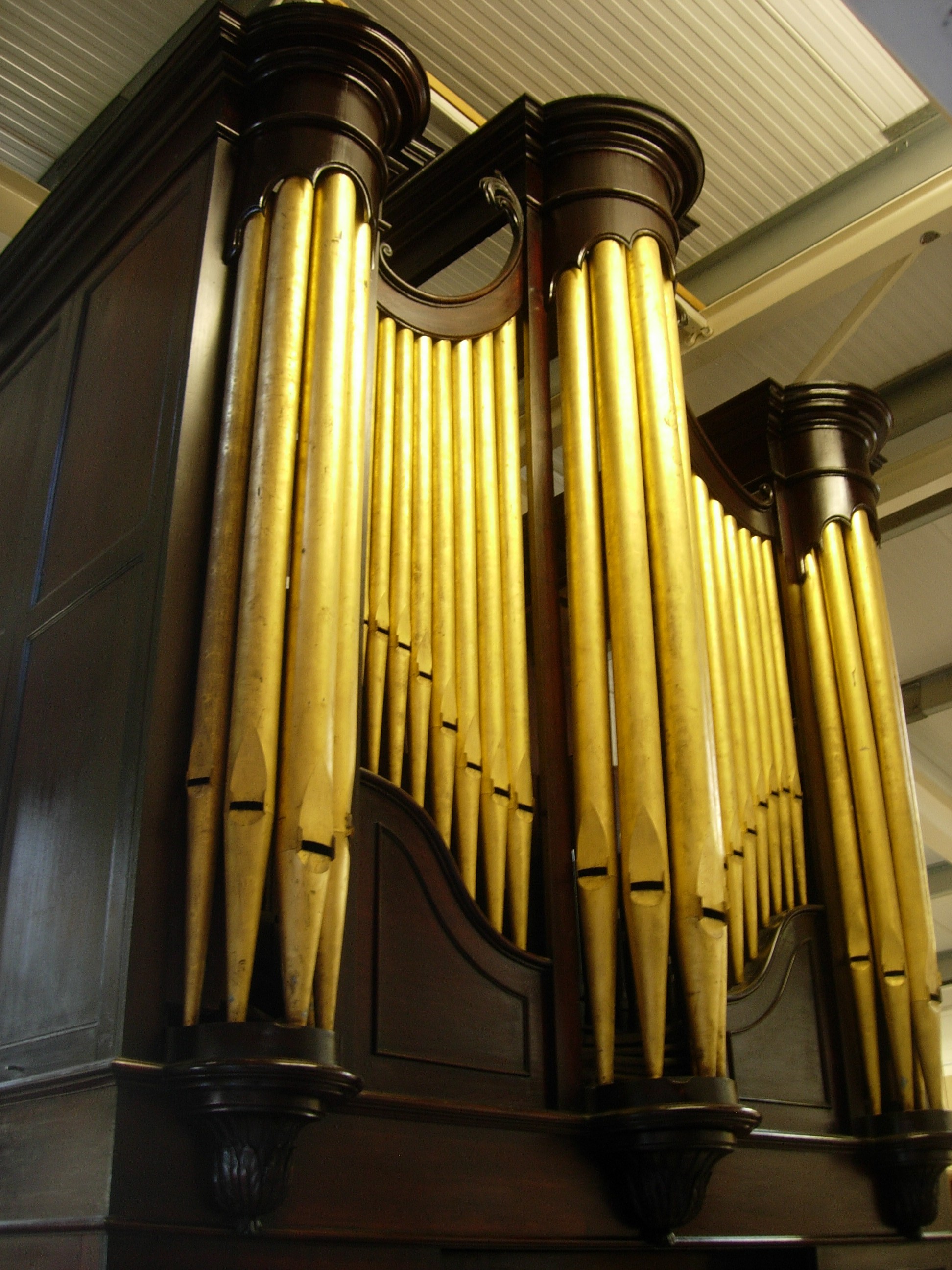 Some changes were made to the 1795 organ during the 1820s, specifically the replacement of some of the principal pipework, the removal of the Trumpet stop, and the addition of the Dulciana stop (a quiet, stringy register favoured by changing taste in the early nineteenth century).

Some twenty years later, in 1844, John Nicholson was commissioned to enlarge the instrument. He left the original organ intact as the ‘Great’ department of the newly-enlarged organ: the Great is played from the lower manual (keyboard). He added two new departments: the Swell Organ of six stops (played from the upper manual) and a set of pedal pipes, operated by the feet on a short pedal- board or by the left hand playing them from the lower manual. (The particular characteristic of a Swell department on any organ is that the pipes are enclosed in a box with shutters: when the shutters are opened by operating the swell pedal, the sound ‘swells’ in a crescendo.)

From 1845 to the present little has happened to the St Swithun’s organ, which again makes this instrument a rare and important survival.

The quality and importance of the Gray organ can hardly be overstated: one really would have to travel as far as London to find anything comparable. It is ideal for performing the large quantity of fine English keyboard music from Handel and Croft, through Stanley and others, and on to the Wesleys. And by simply not using the stops that would be anachronistic, it can play earlier English music very convincingly. The Gray organ can also be used for much of the continental early repertoire – except for those areas needing a full pedal department.

The Worcestershire Organists Association (www.worcestersireorganists.org) can, in cooperation with the Friends of St Swithun’s, arrange demonstrations of the organs and/or can assist players who wish to try the organs: enquiries (on that subject or any other aspects of the work of WOA) can be made via the Contact page of the WOA website here or through the Friends of St Swithun’s.